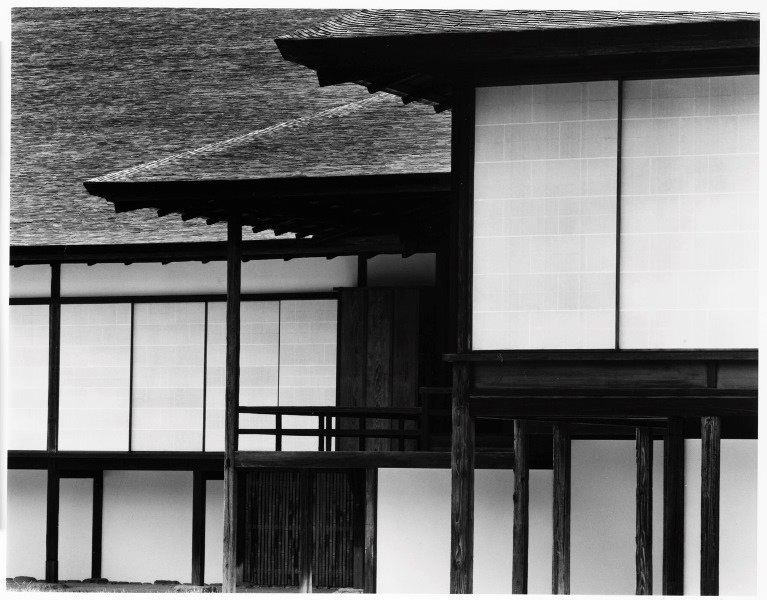 The Beautiful Simplicity of the Katsura Imperial Villa

The stage this time is Japan. One of Ishimoto’s most representative set of works is the Katsura series of photographs of the Katsura Imperial Villa in Kyoto. The airy rhythms that shoji screens and tatami mats create in the soft light; the multiple straight lines of the roofs’ edges; the modernist style expressed through lines and surfaces; the delicate arrangement of steppingstones… Encountering this set of photographs that highlight the appeal of the Katsura villa in details like these certainly make one feel like going and seeing it with one’s own eyes.

Ishimoto photographed the Katsura Imperial Villa twice. The first time was in 1953, when he had graduated from the New Bauhaus, and returned to Japan after temporarily closing the 15-year-long chapter of his life in the USA. Prior to his return, Edward Steichen, head of the photography department of the Museum of Modern Art, New York, was planning an exhibition of Japanese architecture, for which he commissioned Ishimoto to research into Japanese traditional architecture. Ishimoto eventually spent several weeks traveling around the Kansai area together with a MoMA curator and Junzo Yoshimura, who was in charge of designing a teahouse style Japanese house that became the exhibition venue. That was when he came across the Katsura villa for the first time.

To Ishimoto, who used to live between massive buildings made of stone and steel in Chicago, the architecture of the Katsura villa obviously looked very light. “When standing facing toward the drawing room, the white walls and slightly shaded white sliding screens were reflected in the green of the grass and moss around the house, which made the scenery look bright and pure.” (from Katsura)

Looking at the light and airy structure, Ishimoto overlapped the architecture with the familiar modern architecture in Chicago that he had repeatedly pointed his camera at during his student days. Having discovered elements of modern design in the Katsura villa, Ishimoto returned to the place by himself, and took a set of photos focusing especially on details. The results were published in 1960 in Katsura: Tradition and Creation in Japanese Architecture, collectively written with Kenzo Tange and Walter Gropius.

A revised edition, co-authored with Tange, was published in 1971. While looking at these exquisite cuts is an experience that makes one straighten oneself up in a way, there is quite an interesting story behind them. Ishimoto liked the hostel where he stayed during his preliminary study trip so much that he decided to stay there again for the period of his month-long photo shooting. They even prepared lunch boxes for him, which he enjoyed eating during his lunch break in the Katsura villa’s garden. However, not knowing that the hostel was in fact an old-established top level Japanese-style hotel in Kyoto, he ended up unable to pay the bill, and eventually had his father pay for his stay.

The second Katsura photo session was in 1981-82, immediately after the Katsura villa’s extensive restoration. This time Ishimoto was overwhelmed by the rich and splendiferous atmosphere of the entire place, underlined by new sliding doors with elegantly beautiful paulownia designs, and tatami mats in shades of green that varied from one room to another. Aided by his assistant and his wife Shigeru, he carried his heavy gear around, waiting for visitors to disappear so he could set up his camera and shoot. However it frequently happened that, at a stage where he had finally found the right angle and lighting, visitors would come again, so they had to remove everything in a hurry and hide behind the trees. The resulting color photographs were eventually published in Katsura Villa: Space and Form.

The first set of pictures of the Katsura villa showed a heavily decaying building that was largely a matter of black and white, as its colors had mostly faded away. This is exactly what defined the formal beauty that appealed so much to the photographer Ishimoto, who has continued to pursue pure beauty with superfluous elements cut down to the limit. If his first encounter with the Katsura villa had happened after its rich colors and gorgeous ornamentation were restored, the ”Katsura” photographs would probably have never happened. The Katsura Imperial Villa is being described as an object of kirei-sabi (“beautiful simplicity”), an expression that takes the well-known wabi-sabi to yet another level. Ishimoto was ready to absorb this in the first place thanks to his previous encounter with the ”Mandalas of the Two Worlds” at Kyoto’s To-ji temple, which I will introduce in the next installment.