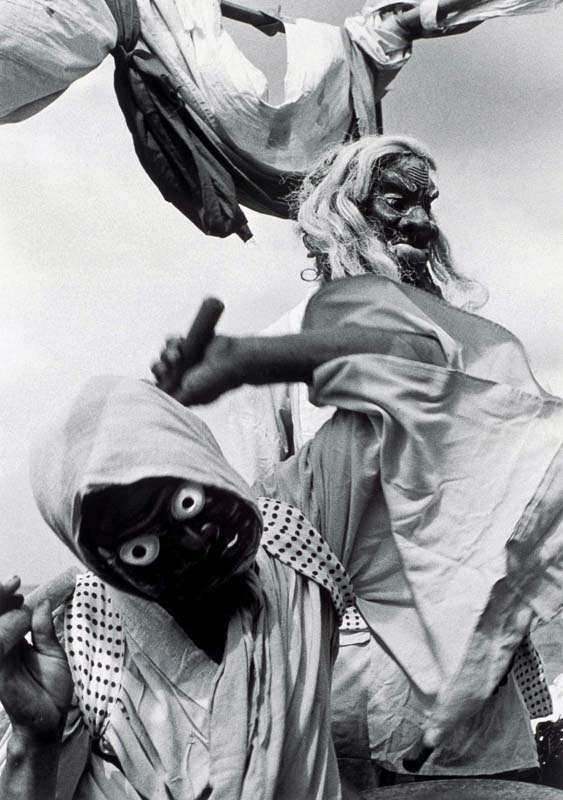 Once the Yosakoi Festival that annually adds some color to the summer in Kochi is over, so is the peak of the summer heat, and the city slows down to its laid-back daily routine. Initially launched with the aim to enliven the local shopping district, the festival is held for the 53rd time this year (2006). In addition to the obvious religious festivals dedicated to the gods and ancestors, there are quite a few Japanese festivals with community-building functions. Among them, this one here is rather exceptional considering its nationwide effect.

There are various festivals in all parts of Japan, and Ishimoto’s photo that I introduce here shows a Gojinjo-daiko performance that is part of an old local tradition in Wajima City, Ishikawa Prefecture. At midnight, drums that are bravely and wildly beaten by men with masks of demons and other eerie creatures come from the other side of the jet-black sea. This is the climax of the Nabune Festival that is held in Wajima every summer. The origins of this festival are said to date back 430 years, to the time when, according to legend, Kenshin Uesugi captured Noto, and unarmed peasants equipped themselves with drums and masks made from tree bark, to chase the enemy away in a night attack.

Ishimoto took photographs at this festival, which has been designated as an intangible cultural property of Ishikawa Prefecture, in the early 1960s. This photo of a dance on a boat, taken from the sea side, conveys the fierceness of Gojinjo-daiko, and at the same time, the feeling of pride of these men that participate in the festival.

This was apparently “the last time the festival was held in its old traditional style.” After that, related also to the fact that the festival was part of a special TV program, the number of tourists increased dramatically, and in order to make the spectacle more easily accessible, they adopted a new style that involved moving the performance from the boat to a stage. What used to be a festival that the locals were simply doing for themselves turned into a tourist attraction.

While increased tourism is a regrettable trend, it is unfortunately also true that such tourism-oriented developments that bring many visitors to the region are a key factor that helps keep traditional performing arts alive. After all, receiving lots of visitors and showing them the festival that they have been carefully passing down the generations is certainly something that boosts the local people’s pride. However, tourism is also capable of changing the original shapes of festivals. Ishimoto is lamenting this difficulty of preserving traditions.

As all traditional culture that people are inheriting is probably being modified little by little each time it is handed down from one generation to the next, such modifications are perhaps quite natural. Kagura, for example, is rather popular as a form of performing arts that is being shown on stages. As it is originally supposed to be dedicated to the gods, it may be somewhat perverted to perform it on a stage, and when performing it somewhere else, it is quickly modified into a portable divine setting that includes prayers and a sacred boundary. This flexibility is perhaps something typically Japanese. Or is it the broad-mindedness of the gods?

Luckily, for the Yosakoi Festival there are no patrimonial restrictions that have to be preserved and followed, which allows the festival to change freely in whatever way. In recent years the Yosakoi is regularly taking place in a cleansing rain so to speak, even when the weather is fine for weeks before and after. Today, fifty years later, it seems that this festival too has been jinxed.