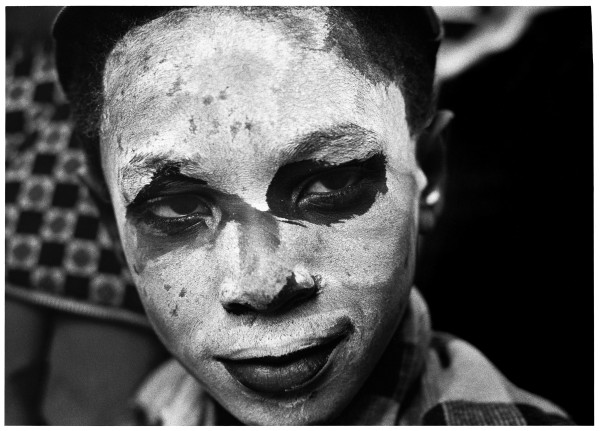 The photograph introduced in the previous installment of this series shows a girl playing at a park. The girl is tied to a tree, and to many it obviously looked as if she was being abused. Children are sometimes ruthless and cruel. It probably was some kind of game in which brave boys would free the captured heroine. Children’s games are changing with the times (in different ways depending on the country). Yasuhiro Ishimoto used to play samurai using a wax tree’s branch as a sword when he was a child. It is a toxic plant that causes a rash and makes the skin turn red when touched, which added an oddly realistic sensation to Ishimoto’s play.

A particular favorite among American children is Halloween, a Christian event on All Saints’ Eve. All Saints’ (or All Hallows’) is a day on which the dead come home, comparable with the Japanese O-bon. On Halloween, children dressed up as ghosts go from door to door to collect sweets while shouting “Trick or treat!” Shops that close before the children arrive and other places where they come away empty-handed are punished with graffities or otherwise, but as god allows the kids to play tricks on this day, the grownups don’t blame them.

This series depicting children at Halloween as they roam the streets wearing their favorite costumes and hollowed pumpkins on their heads, and carrying big paper bags to be filled with sweets, is another one of Ishimoto’s particularly well-known works.

Ishimoto photographed children at Halloween in the late 1940s when he was a student, and once again during his second stay in Chicago in the late 1950s. The outcomes are very different. The second “Halloween” is a series of close-ups of children’s faces filling out the entire picture. With his previous camera, Ishimoto wasn’t able to move up closer than one meter, but the newly invented single-lens reflex camera made it possible to shoot at point-blank range.

As the children don’t go out into the streets before the evening hours on Halloween, the photographs were necessarily taken in dim settings. When trying to photograph frolicking children at dusk from a distance using a tele lens, the results necessarily get blurry, so this photo was obviously shot from up close. Looking at the photographs in this series, one can almost feel the sense of elevation and liveliness of the situation, with children appearing one after another in front of Ishimoto while he keeps looking through the viewfinder.

“The number of black people seems to be increasing in big cities across the USA. This also applies to Chicago, where many black people live. I catch myself time and again falling for the somewhat wistful expressions on their faces. And then a boy with his face painted all white appeared right in front of me. The boy’s face seemed to come toward me as I zoomed in.” This is how Ishimoto commented the photo when it appeared in the January 1962 issue of Asahi Camera magazine.