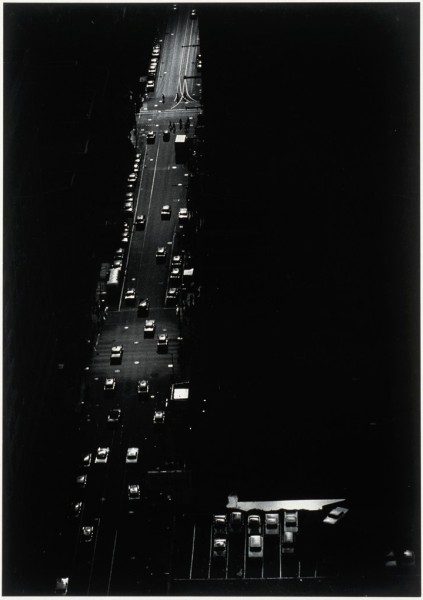 Lights and Shadows of Chicago

The Ishimotos’ wedding anniversary was at the end of last month (October). As they married in 1954, they would have celebrated their golden wedding last year (2004). Matchmakers between the couple were ikebana artist Sofu Teshigawara and architect Kenzo Tange, and their wedding reception was held at the International House of Japan in Tokyo, organized by members of the Japan Design Committee of which Ishimoto was a founding member as well.

The collection of private photos included pictures of the reception. Ishimoto was wearing a suit, his wife a dress. There weren’t wearing kimonos. The party style celebrating with close friends has become a standard format nowadays, but obviously they already did a simple reception in a homelike atmosphere like it is done today as early as 50 years ago.

Ishimoto was accompanied by his wife when he returned to Chicago to live there from 1958 until 1961. He received a grant of 300 dollars per year from Minolta, and spent the time concentrating on his shootings in the streets of Chicago. This photograph is from that period. It shows Chicago’s Michigan Avenue, shot from a point high enough to look like an aerial photo, in an impressive combination of deep shadows and light falling onto the street. The light looks celestial as it seems to be encompassing the entire city.

The view of Michigan Avenue shows the Gothic style building of the Chicago Tribune newspaper on the right, and across the street from it, chewing gum manufacturer Wrigley’s Renaissance style building on the left. The photo was shot from a high building on the opposite bank of Chicago River that intersects with Michigan Avenue. The angle and lighting conditions weren’t something that Ishimoto had worked out, but he just happened to be in that building for some unrelated business when he spotted a view he wanted to capture, and eventually shot this photograph.

The first thing that jumps to the eye are rays of sunlight falling through gaps between the buildings so massive that they seem to be crushing the street. When looking closer, one can see two areas that look as if illuminated by spotlights. These are intersections where loopholes allow the light to flow in and accumulate.

Due perhaps to its buildings made of stone, Chicago is said to be producing particularly black shadows. Come to think of it, isn’t there always something utterly blackish about movies set in Chicago? It’s all about the height and material of the buildings that create deep valleys, and the width of the streets. And then, a moment like this, where the sunlight hits the street right from above. A photo of a scenery as exquisitely illuminated as this must be impossible to shoot as soon as any one of the above factors isn’t perfect. The light we see here is the light produced by the streets of Chicago, and this photograph is one that was possible in the Chicago of 50 years ago.

It almost seems as if the choreography of light has been taken into account for the town planning of Chicago, reputed as the Mecca of modern architecture. However, amidst that beauty are tiny humans living between the increasingly modern huge architecture while almost getting crushed by it, and streams of cars representing the American automobile society. What could it be that Yasuhiro Ishimoto saw behind that glittering light on Michigan Avenue that embraces these people?