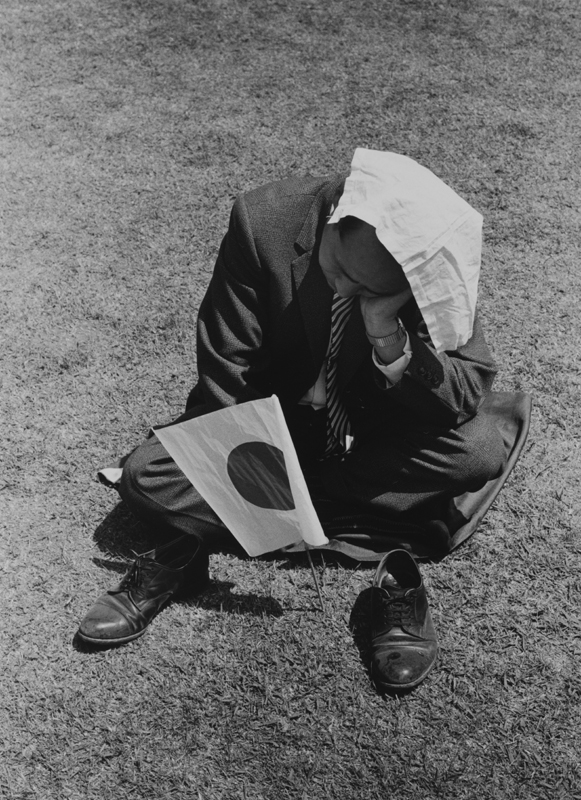 With European teams including that of host country Germany advancing to the semifinals, the soccer world cup is exciting enthusiasm around the world. I watched one of the “Zico Japan” team’s matches on TV, earnestly from players taking to the field to the end, but they unfortunately dropped out at the group stage. When the national anthems were played prior to the match, I was fairly surprised to hear “Kimigayo” (Japanese national anthem) reverberate across the stadium, as if they had flown in an entire choir from Japan to sing it.

As national flags and anthems are controversial issues especially at school events, looking at the flags and listening to the anthems at such international sports events causes a tense kind of feeling also in the spectator. While face painting certainly is something “just for fun”, and people seem to have no problems casually wrapping the “Hinomaru” (Japanese national flag) around their bodies, I had expected that many of them are rather hesitant to raise their voices and chant the national anthem, so this big chorus felt quite unusual. It was the third appearance of a Japanese national team at a world cup, so supporters have probably gotten used to watching and cheering at international events – or was it an accumulation of feelings yearning for victory?

As Hinomaru and Kimigayo are slightly delicate issues, I don’t want to dig deeper into that matter, but anyway, Ishimoto apparently developed some kind of interest in the relationship between the Japanese and their flag, which inspired him to focus on chasing after the Hinomaru for a certain period of time. In 1963, a year prior the Tokyo Olympics, he walked around in the messy streets of Tokyo, and photographed all kinds of Hinomaru sceneries. The flag as decoration at ceremonies; the flag clutched by old ladies in Japanese style attire; the flag wrapped around poles…

The photo I’m introducing here was shot on the premises of the Imperial Palace. Ishimoto captured this scenery with a bit of irony. It was probably around the (Showa) Emperor’s Birthday. This totally exhausted man with his shoes off apparently doesn’t quite know what to do with the flag that someone had given to him, so he just stuck it in the ground like a little flag on a kids’ lunch. Slightly tilted to the side, the curly flag looks somehow lovely and wistful at the same time – just like the painted Hinomaru on the cheeks of the strung-out fans after cheering heart and soul in their hope for victory.

During his time in Chicago, Ishimoto frequently photographed the Star-Spangled Banner as well. Having lived in Japan and America, in these photographs he tried perhaps to depict something like the two nations’ pains and aches that are expressed in the respective people’s feelings toward their national flag. Those are manifested in white ladies looking at a black girl with two American flags in her hands, or a Chinese- (or Japanese-) American whose face is half hidden behind the fluttering Stars and Stripes.

July 4 is the American Independence Day. I wonder what kind of sceneries with the national flag we could see in the USA today…