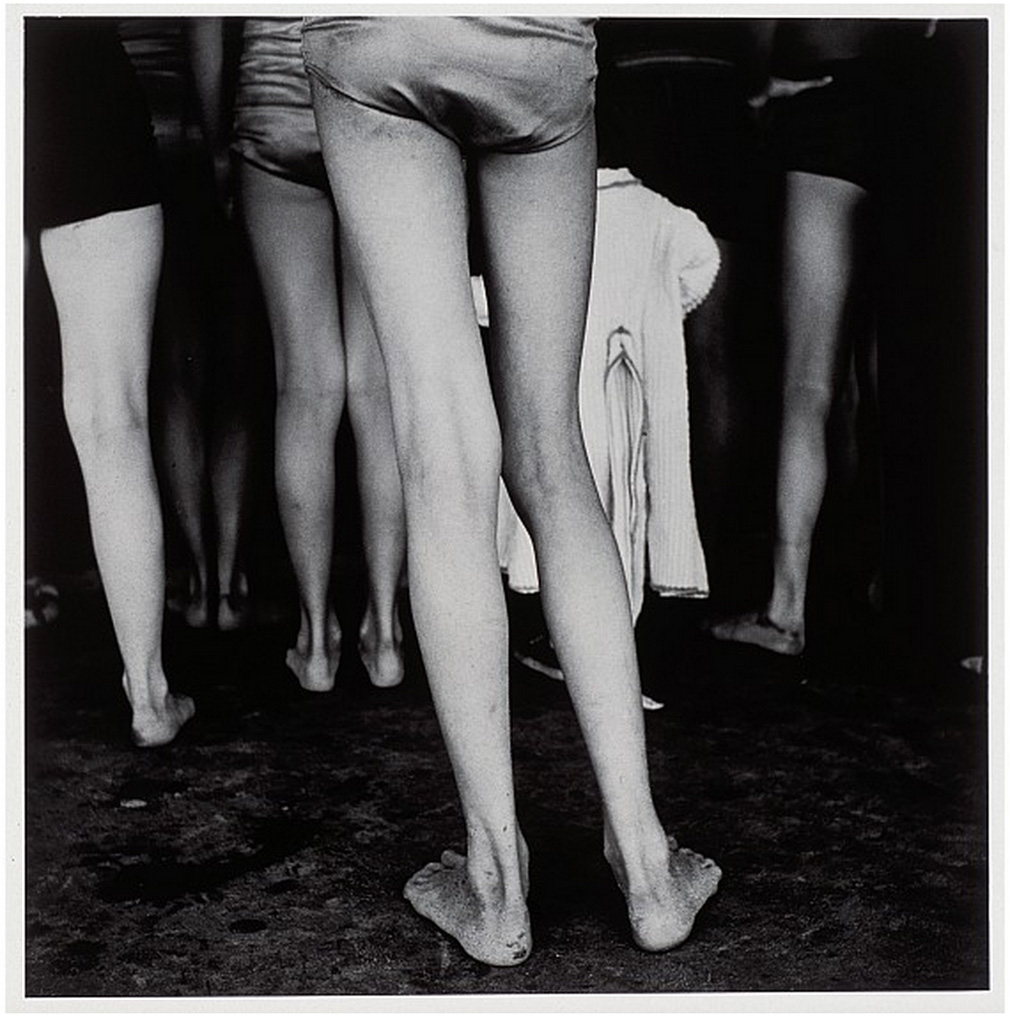 One of the Chicagoans’ favorite leisure activities in summer is swimming in the lake. Chicago is located in the inland region and therefore remote from the seashore, so their beach is at Lake Michigan, one of the five Great Lakes. Covering an area of 58,000km2 (about 90 times that of Lake Biwa), Lake Michigan is not only the sixth biggest lake in the world, but it also has beautiful sandy beaches.

When standing on the lake’s edge, the opposite shore is far away, and with the surf that rolls onto the white beach, it seems to be just as if standing on the seacoast. There are a number of bathing points at Lake Michigan, the most famous of which is North Avenue Beach at the south end of Lincoln Park.

The legs in the foreground of this photograph supposedly belong to a boy. Their moist, long and supple appearance, together with the pronounced Achilles tendons, make it look almost like one of Michelangelo’s marble sculptures. Among the people crowding the beach, the boy is highlighted as if standing in a different space and time, wrapped in an air of soaring silence.

While a number of other figures are visible in the back of this picture, the photo was in fact also published as a cropped print showing only the boy in the foreground. Although Ishimoto has always been trying to avoid displaying Japaneseness and emotionality, his style was reminiscent of that of the picture scroll as an embodiment of Japanese formal beauty.

In addition to this photograph, there are numerous other shots of feet or back views of people at a drink stand. Even where only feet are visible, the pictures come with the additional fun of inspiring the viewer to imagine the scenery outside the frame. Some feet suggest people having a pleasant chat, others tired figures drinking with their elbows on the counter. The “North Avenue Beach” series eventually became one of Ishimoto’s best known series of works.

He did one more beach series, dedicated to the coast of Enoshima (Kugenuma). These photographs depict chaotic scenes of a beach littered with garbage and swarming with sea-goers. Some of them are sunbathing right next to a construction shovel that is parked on the beach. Amazing as it is to see people on a beach full of garbage, through these photos they seem to tell the viewer that the place is just fine as long as they can enjoy themselves, no matter what garbage and construction machines surround them.

The photographs of Enoshima (Kugenuma) were made in the 1960s, when Ishimoto was living in the annex of the house of Koyo Kageyama, a photographer from Fujisawa, Kanagawa. It was a time when Japan had just entered the period of high economic growth, and urban development and environmental destruction had begun to increase rapidly. That other beach series seems to be portraying a Japanese people quite unconcerned about the devastation and transformation that was happening around them.