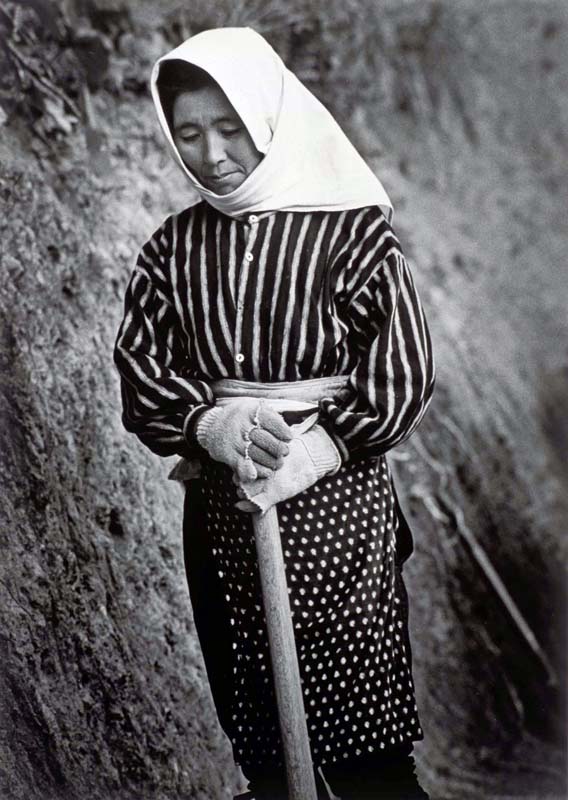 There is an almost prayer-like silence surrounding the worker that humbly lowers her gaze as she puts her hoe down to the ground. The layered texture of the slope in the background, the handle of the hoe, and the striped pattern together project a moderate evenness, while the dots on the apron add a soft accent.

When looking at this photograph, Ishimoto always admires the woman’s appearance. “People used to dress like this back in the day, very stylish indeed. There is human dignity in this.” The photo was made for a “Women of the Oga Peninsula” special in the monthly magazine The Sun (1963). The feature also included a text by Setsu Asakura, who was appointed Person of Cultural Merits this year (2006).

A magazine dedicated to current topics and beautiful photographs from the realm of art and culture in Japan and abroad, The Sun was published from 1963, two years after Ishimoto’s return from his second stay in Chicago, until 2000. Ishimoto has been deeply involved with the magazine since the launch of the ”Forms of the 20th Century” corner in the second issue. His features included “The World of A Thousand and One Nights” with Tatsuhiko Shibusawa, “Trip to Kyushu Sekibutsu” with Shusaku Endo, “Kofudoki (Ancient Topographical Records)” with Seicho Matsumoto, and many others. During his work for the “Kōbō-Daishi” special, he came across the mandalas at the To-ji temple that eventually inspired his landmark “Mandala” series.

In the ”Zubari Gendai” corner, a regular in 1968-69 that featured Yukio Aoshima, the Jokyo Gekijo (Situation Theater), female show wrestlers and other people of the day, Ishimoto’s picture of Yukio Mishima pulling an empty rickshaw expressed the photographer’s doubt as to whether “there were actually people getting aboard” the Tatenokai (Shield Society) that Mishima had established at the time. The series offered a glimpse at another, (sometimes black) humorous side of Ishimoto, who was otherwise known for his sternness.

Ishimoto has repeatedly pointed out that his works for magazines were “not [his] own.” Therefore, there aren’t many occasions to see those works. While I understand very well that he distinguished between commissioned photographs and those he took of his own account, the rigorous approach to “thoroughly capturing” his subjects, and the faithfulness regarding the “things” surrounding them, are just the same in both cases.

Even for commissioned photographs, Ishimoto researches into the respective topics, reads the writings of those who contributed texts, and approaches the shootings based on his own preliminary mastication. At assignments in the countryside, he digs into the matter he was given, and only lets go just in time to get back home. Out of this attitude as a photographer emerged Ishimoto’s own personal interpretation, which ultimately projects the invisible nature of his subjects onto the pages of magazines.

I once heard an editor comment that ”Mr. Ishimoto’s photos are so perfect that trimming for printing in a magazine is almost impossible.”