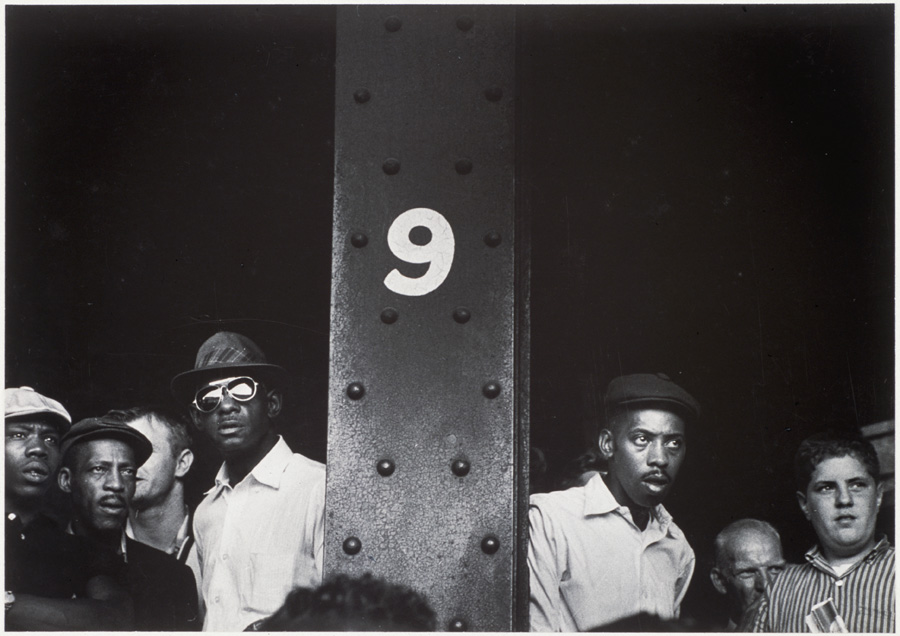 Grouped around two men in the center, the crowd in this picture hold their breath as they gaze at a certain point. The photograph is charged with a sense of tension that suggests that something is about to happen this very moment, whereas the massive pillar that marks the central element here pushes the tension further up. What is it that these men are staring at? A hint can be found painted on the pillar. As you can probably guess from the number “9”, they are watching a baseball game.

The photo was shot in a baseball stadium in Chicago, where successive numbers are painted onto the pillars to indicate blocks of stands. Ishimoto deliberately chose block 9 like some kind of code, and at the same time, he composed the photograph so that the white “9” marks the vertex of a triangle it forms with the white shirts of the two men on both sides of the pillar. The grain of humor contained quite casually in the tense picture composition is a particularly clever ingredient of this photograph.

Ishimoto received two awards this year for donating the entire body of his work to Kochi Prefecture – the Medal with Dark Blue Ribbon and the Kochi Prefecture Cultural Award. Last month (November 2005), Mr. and Mrs. Ishimoto came to Kochi for the awarding ceremony, and we had a very pleasant time chatting with them and the Kochi Newspaper editors in charge of this corner. As it was shortly after the victory of the Chicago White Sox, this photograph was one of the evening’s topics, and Ishimoto told some funny anecdotes about the Chicagoans’ enthusiasm for baseball.

Every time an item is donated to an art museum, the procedure includes a screening in which experts judge whether the work in question is appropriate for the respective museum, and whether the price is fair. In last year’s screening of Ishimoto’s works, all pieces on the list were unanimously approved. Another one of these screenings was held again this year, where the next batch of Ishimoto’s works that arrived at the museum came under review. Everyone in the jury seemed to be envying the museum for obtaining these works, and urgently requested us to lend them to other museums once things have settled down in the collection. We also received the serious advice that, entrusted with these precious works, it is the museum’s responsibility to put them on display and communicate the magnificence of the internationally renowned photographer Yasuhiro Ishimoto to the people of Kochi.

The collection exhibition that opened on December 21 at the Museum of Art, Kochi, featured a total of about 200 of Ishimoto’s works divided into two periods (“The World of Photographer Yasuhiro Ishimoto” exhibition 2005). One of the particularly appealing qualities of Ishimoto’s works is the beauty of the prints. We invite you to relish the beautiful textures of original photographic prints that are impossible to recreate in print media.