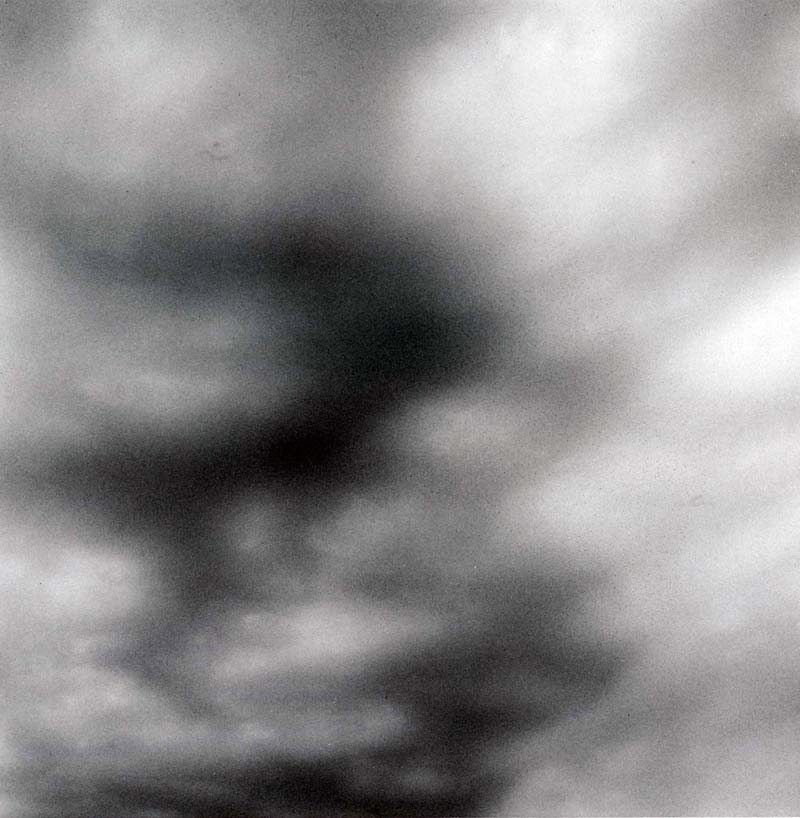 Looking at the clouds and imagining all kinds of shapes is fun. Like a playful response to those shapes, the clouds have been given a variety of different names, but those in Ishimoto’s photos aren’t clouds that suggest any concrete kind of object. If anything, he chooses misty or abstract looking clouds.

Ishimoto’s photographs seem to be casually framing instances of clouds as accumulations of microscopic water particles that drift along, gather, and disperse again in the sky; clouds that are about to transform from one thing into another as they pass by. His shooting locations are the windows of his apartment. ”I always have my Hasselblad ready by the big glass door, and whenever I spot an interesting looking cloud in the sky, I literally drop everything and rush out onto the balcony.” (from Shigeru Ishimoto, Life with Yasuhiro Ishimoto)

The fledgling modern and intelligent photographic work of Yasuhiro Ishimoto, defined by a sharpened plastic sensibility and a thorough grip on his subjects, unfurled in an entirely new series around the mid-1990s. The focus of his attention shifted to the flowing water of the Meguro River, and further, to decomposing leaves and empty cans that people stamp on in the street, footprints in the snow, and such mostly shapeless things as clouds. This series Ishimoto calls “Utsuroi (transition)”.

In the process of hurling himself into Japanese tradition in the form of the Katsura Villa, the mandalas, and Ise Shrine, Ishimoto has apparently developed a deep awareness of the passage of time. ”Especially the work at the Ise Shrine was an experience that taught me a lot about aspects of time. I wound up reflecting on questions of time, things that disappear, and how exactly the Japanese people are perceiving time.” Such are the things that have come to occupy his mind.

While historical architectural structures like the Horyu-ji temple for example are aiming to exist for hundreds of years, it has been an unremitting tradition that the Ise Shrine is completely destroyed and rebuilt every twenty years. Ishimoto interprets this as two types of time, that appear to be “linear at the Horyu-ji, and gradually spiraling up in Ise.”

When looking at clouds and decomposing fallen leaves, one notices that they are not disappearing, but only changing their shapes. What we see is a brief moment within a longer cyclical process of one thing transforming into another. Come to think of it, quite a few of Ishimoto’s works show buildings under construction. I read somewhere that, asked why he photographs buildings in the middle of being erected, Ishimoto explained laughing, ”Photos of completed buildings you can take at any time, but the chance to capture the process will never come again.” The point here certainly is a form of “transition” as well.

Even though the mushrooming highrise buildings in the Shinagawa area stand like a folding screen that blocks the sky in the distance, Ishimoto has a good view of the sky from the windows of his apartment. Situated on an extensive and lushly green plot of land next door is Mitsubishi Kaitokaku, and while making a good surrounding landscape, “the more their trees grow, the more they take away from the sky…” Ishimoto grumbled with a sense of discontent. The Sony lab across the street was apparently sold just the other day, and before long they will probably erect another huge building there right under his nose. ”I won’t be able to shoot the clouds anymore. But I guess I’ll be pushing up daisies then anyway,” he remarks crisply. ”Isn’t it woeful to hear that Sony are selling their headquarters! I wonder where this will lead to…” And before we knew it, our conversation was drifting along, from photography to current topics.

Over the course of two years, I introduced you to the world of the internationally renowned photographer Yasuhiro Ishimoto. While I keep reflecting over whether my accounts properly conveyed the appeal of Ishimoto’s work, I think that the photographs themselves are in fact already saying enough. I am deeply grateful to Mr. Ishimoto for forgiving my self-indulgent commentary.