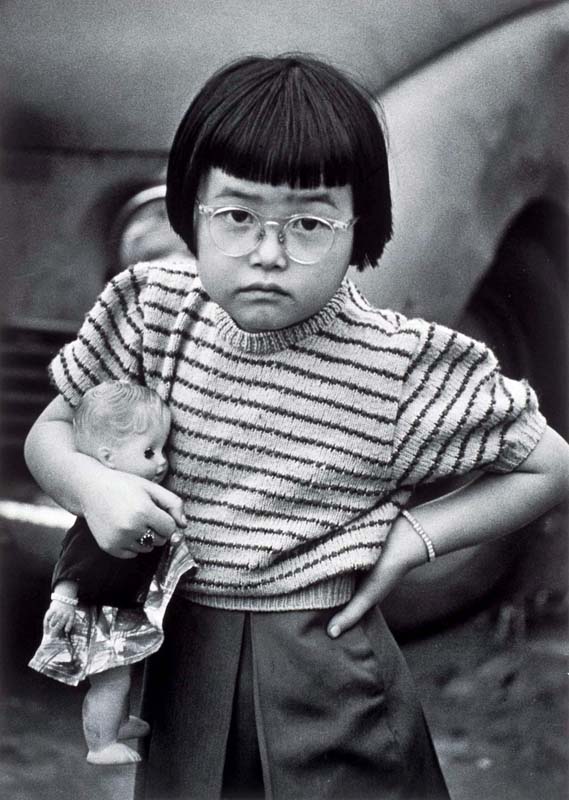 I took my slightly belated summer vacation recently and went to France. There was no particular purpose other than seeing Marc Chagall’s stained glass at the Reims Cathedral, and Chapelle Foujita, so the plan was to just ”take my time and stroll through the pretty streets.” But then, out of the blue came the news that Yasuhiro Ishimoto was having a one-man exhibition at a gallery in Paris, so I added the desire to ”see that by all possible means” to my travel planning.
When I arrived at the gallery on the Boulevard Raspail with a map in my hand, I found the place closed and with the shutters down. I peeked through gaps in the shutter, and saw Ishimoto’s photos on the walls. After sticking to the shutter and peeping inside for a while, I noticed that the gallery’s owner had arrived, and when telling him that I came from a museum in Kochi, he asked me to ”excuse the mess and come inside.”
Displayed on the ground and basement floors of the gallery, a space of about 20 square meters, were a total of about 50 items from Ishimoto’s first ever photo book, Someday Somewhere (“Aru hi aru tokoro”, 1958), and from his latest, Moment (“Toki”, 2004). Some works that were yet to be put up were lined up on the floor, while other, unframed ones (probably items for sale) were stored in several boxes in cabinets. The gallery had been involved with Ishimoto’s work and doing several exhibitions before, and I was told that the announcement of the opening of this show titled ”aru hi aru tokoro” evoked an unprecedentedly strong response from those who received the notification.
For Someday Somewhere, a spirited photo book containing pictures that Ishimoto took as a student in Chicago, and those shot over the period of several years during his stay in Japan after graduating, Ishimoto and Ryuichi Yamashiro, who was in charge of layout and binding, carefully picked close to two hundred from a total of several thousand prints. The photographs are divided into the three chapters ”Someday Somewhere”, “Beach” and “Little Ones”, but not separated into photos taken in Chicago and in Japan, and I remember browsing through the pages and seeing children playing swordfight in a busy street, apparently right next to kids swaggering in a Halloween parade.
This photo book that begins with Ishimoto’s foreword and the sentence “Someday somewhere… all things are alive” celebrates swelling richness of the mind, and overflowing vital energy. As such it is one item that people involved with photography still remember and talk about even now that half a century has passed since its publication.
For this exhibition ”the gallery made an odd kind of selection,” Ishimoto once pointed out, and while I’m not sure how to describe that selection, I felt that it had something typically “Parisian” about it. The displayed works were apparently chosen primarily for the elegantly sophisticated atmosphere they projected. In Japan I guess they make their selection based on the Japanese taste, and in Chicago, they choose pictures that match the taste of the people there. And that again is probably what Someday Somewhere is all about.