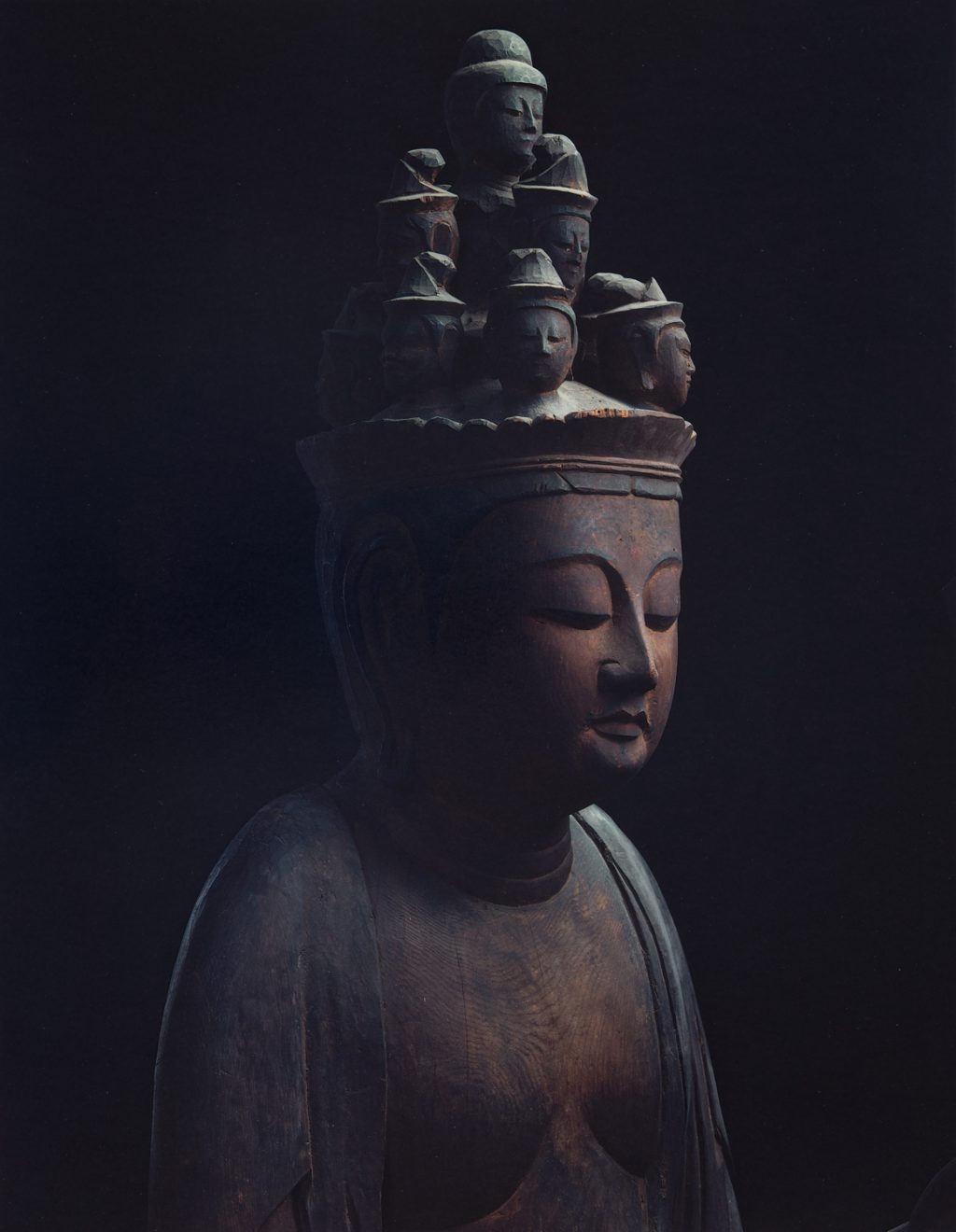 Shiga prefecture, known as Omi province through the early modern period, is next door to Nara and Kyoto, Japan’s ancient capitals. Located where people were moving about extensively and trade flourished, the area developed not only through land transport but also water transport on Lake Biwa. Moreover, the western side of Lake Biwa (Kosei) is territory of great religious significance, for there are located the Hira Mountains, which include Mount Hiei, where Enryakuji Temple, a Tendai Buddhist temple, was founded by Dengyo Daishi Saicho in the eighth century.
In 1981, Ishimoto Yasuhiro suddenly received a proposal for a new project: to photograph the Eleven-Faced Goddess of Mercy images in several temples in Shiga and hold an exhibition timed to coincide with the summer and fall tournaments of the National Sports Festival of Japan, which were being held in Shiga that year. With only a limited period of time until the tournaments were to begin, Ishimoto’s schedule would be quite tight. But since many of Eleven-Faced Goddess of Mercy images in question were not usually on public view and opportunities to photograph them were rare, Ishimoto willingly agreed to take part. That said, it was his custom to make thorough preparations before shooting, and this project would also require making detours around Lake Biwa to reach the temples scattered throughout the prefecture. Getting himself and his equipment from one location to the next was nerve wracking.
Ishimoto was intermittently photographing Buddhist art in the 1970s. In 1973, in photographing the Mandalas of Two Worlds at Toji Temple, he discovered what he termed the eros that pervades the view of life presented in those mandalas. Around 1977, while photographing groups of stone Buddhas in the Kunisaki Peninsula, Oita prefecture, he sought the essence of the Japanese people in the culture and customs handed down in unbroken succession in that region. Then in photographing the Eleven-Faced Goddess of Mercy, he saw for himself the images of Goddess of Mercy, reverently enshrined in halls of Buddhist temples, standing as though shoulder to shoulder with the local people. He realized, he has said, his own deep faith in the Buddha, which he had been on the verge of forgetting.
This exhibition presents the original color prints of Ishimoto’s photographs of Eleven-Faced Eleven-Faced Goddess of Mercy images at eleven temples.