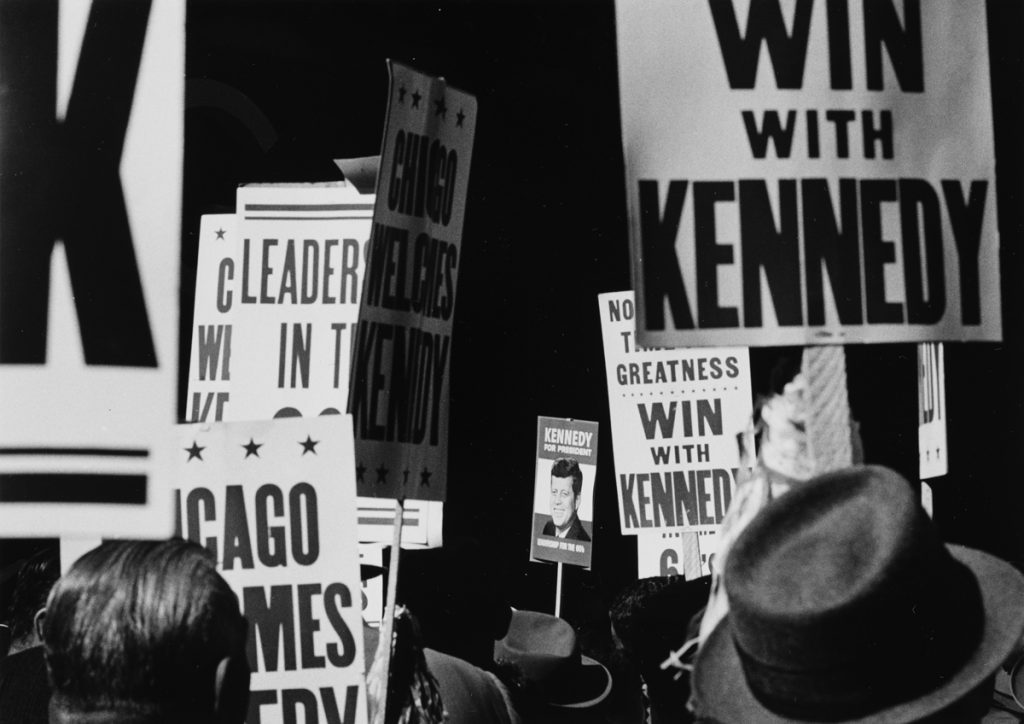 Sixty years ago, in 1960, the USA was in an election year just like now in 2020. It happened to be the time when Ishimoto was living in Chicago, where he took a large number of photographs to capture the mood of the moment.

He imposed on himself the task of photographing people – which he was aware of as something he wasn’t particularly good at – and started roaming the streets of Chicago, walking and shooting until the soles of his shoes literally came off. For him, the crowds marching and cheering for the candidate they supported, or for their own acquisition of freedom and rights, surely were a welcome subject. Their forceful expressions and attitudes were in complete harmony with the slogans and images on the placards and signboards they were carrying, and the energetic swirl all this created in the US society is vividly documented in Ishimoto’s photographs.

One of the chapters in Chicago, Chicago (Bijutsu Shuppansha, 1969), one of Ishimoto’s most well-known photo books, is dedicated to the city’s people and their political activities, including also pictures of the Stars and Stripes put up in the streets. From this alone, one can guess just how fascinated Ishimoto was with these things at the time. Ishimoto was an American citizen because he was born there, so documenting the election, the outcome of which would significantly impact the future direction of his home country, was perhaps also an opportunity for him to contemplate on his own national identity.

In this exhibition, Ishimoto’s photos of the election campaigns in Chicago in 1960 are displayed in a largely chronological order, based on the numbered film strips that he left behind.