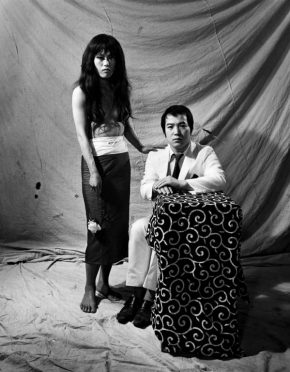 Having studied the concept and methodology of modern photography at the New Bauhaus*1 in Chicago after the war, Ishimoto Yasuhiro developed his own austere formative and compositional sensibility backed by the philosophy of Bauhaus style modern design, for which Kochi-raised Ishimoto became one of the most nationally and internationally renowned photographers in Japan.
While claiming that he considered photographing people more difficult and trying than shooting other subjects, Ishimoto consciously turned toward portrait photography during the three years he lived in Chicago between 1959 and 1961.*2 This exhibition focuses on portraits of young artists and other contemporaries taken by Ishimoto in the 1960s.

*1 Design school in Chicago established by Moholy-Nagy after leaving the Bauhaus design school in Germany. In 1948, the year Ishimoto entered the school, its name was changed to “Institute of Design”, before it was incorporated into the Illinois Institute of Technology in the following year.
*2 “Amerika de mita koto, Nihon de mita koto (things seen in America, things seen in Japan)”, a conversation between Hamaya Hiroshi and Ishimoto Yasuhiro published in the February 1962 issue of Camera Geijutsu.

A Portrait of the Artist as a Young Man

In 1965, Ishimoto photographed eleven young artists for an issue of New Japan magazine that was going to be published abroad.*3 Kojima Nobuaki, Usami Keiji, Tanaka Atsuko, Isobe Yukihisa, Okamoto Shinjiro, Kikuhata Mokuma, Ikeda Masuo, Miki Tomio, Kano Mitsuo, Yamaguchi Katsuhiro and Shinohara Ushio – in retrospect an impressive line-up of leading figures in art in post-war Japan.
In 1956, the Annual Economic Report proclaimed that “it’s no longer the post-war era,” and art critic Tono Yoshiaki used the expression “post-Hiroshima generation” when referring to these artists that were becoming increasingly active at the time. For them, the abolishment of old values was anything but tragic, and as Tono put it, for them the ashes of the old much rather functioned as a cradle and a “playground” of sorts.
Looking at these young people’s faces as they stand in front of their own works, one recognizes a variety of expressions, ranging from almost insulting displays of self-confidence to intelligent-looking coolness, and the attire of a boxer. However, closer inspection reveals traces of stiffness in these faces, and the idleness of their bodies is perfectly exposed. It is a frequent come and go of inner ambition and anxiety, and that complex psychology of young artists is portrayed quite undramatically in Ishimoto’s straightforward photographs.

Ishimoto made a set of photographs for the “Zubari Gendai” series published in Taiyo magazine in 1968 and ’69.*4 Based on the idea to showcase talked-about persons and events of the time from any kind of genre, the series featured the likes of Oh Sadaharu, Takakura Ken, Mishima Yukio, Wada Ben, Kara Juro, Egami Tomi, and even female professional wrestlers. Texts were contributed by Dan Kazuo, who is being referred to as the last of the buraiha poets. His writings and Ishimoto’s photos together were magnificent clippings of prominent people and occurrences in the late 1960s.
On the other hand, in 1962 Ishimoto published a series of photographs titled ”Face of Chicago” in Camera Geijutsu*5, which was followed in 1963 by “Face of Tokyo”, serially published in Camera Mainichi*6. These “faces” were not the faces of famous celebrities, but portraits of ordinary people living in these two cities.
Around the year 1960, William Klein’s New York (1956) and Robert Frank’s The American (1958) had a big impact on young photographers in Japan, after which the quality of portrait photography had changed significantly.*7 While the dividing line between portrait and documentary photography was becoming blurred, Ishimoto, just like the two above-mentioned photographers, captured in his works aspects of cities and their inhabitants.

*4 “Zubari Gendai”, published between the September 1968 and June, August and September 1969 issues of Taiyo magazine (Heibonsha).
*5 “Face of Chicago”, published in the February 1962 issue of Camera Geijutsu, and subsequently won the Camera Geijutsu Award.
*6 “Face of Tokyo”, published monthly from January until December 1963 in Camera Mainichi.
*7 William Klein’s New York and Robert Frank’s The American were both included in Ishimoto Yasuhiro’s library. The detailed description in the library list reads “William Klein, LIFE IS GOOD & GOOD FOR YOU IN NEW YORK, éditions du Seuil, 1956” and “Robert Frank, LES AMÈRICAINS, Robert Delpire, 1958”. Both are first editions, but it is not clear exactly when Ishimoto obtained these books.