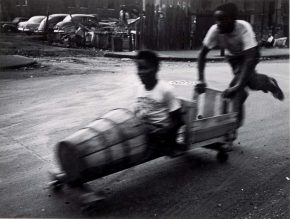 Having grown up in his parents’ hometown, after graduating from the local high school Ishimoto Tasuhiro left Japan for the USA, where he enrolled at the Chicago Institute of Design* to study photography. The curriculum based on the educational philosophy of the Bauhaus school began with classes teaching the basics and aesthetics behind creative work, which for Ishimoto meant not only studying the ideas and methods of modern photography, but also cultivating the formative sensibility that would constitute the bedrock of his endeavors. Under his teachers Harry Callahan and Aaron Siskind, and together with his fellow student Marvin E. Newman, he devoted himself to his studies while gradually improving the artistic quality of his work. Ishimoto’s passionate efforts during his time at the Institute were repeatedly rewarded with the Moholy-Nagy Prize. Even after graduating, he stayed in touch with Callahan, Siskind and Newman, and Ishimoto actually owned several of their works. Focusing on Ishimoto’s student years, this exhibition introduces his own works made at the Institute of Design, as well as items from Ishimoto’s private collection by photographers he had been acquainted with at the time.

*Commonly known as “New Bauhaus”; merged with the Illinois Institute of Technology the year after Ishimoto’s enrollment.