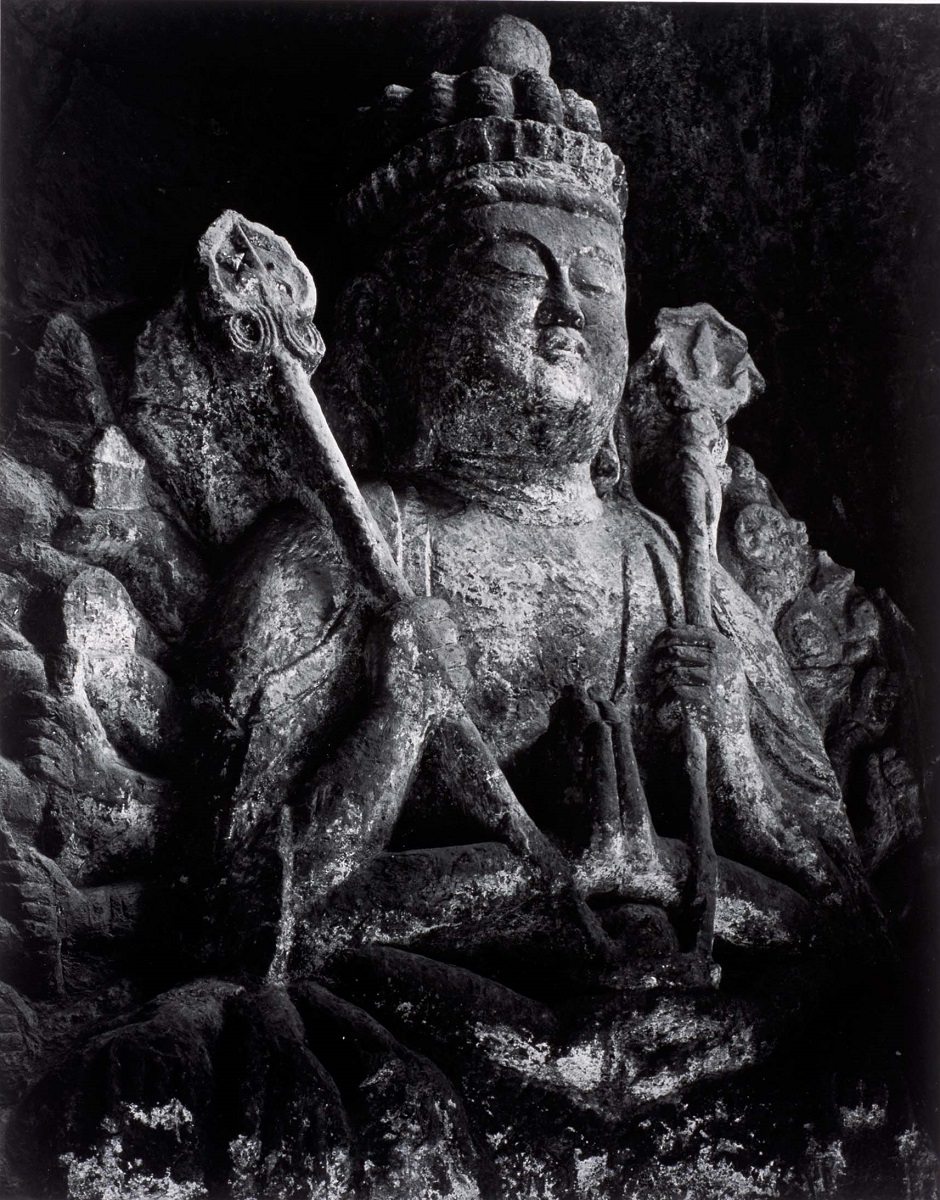 Located in the northeast of Oita Prefecture in Kyushu, the Kunisaki Peninsula protrudes into the sea in a shape that looks like a bowl turned upside down. This is where a unique hybrid religious culture called ”Rokugo-manzan (Mountain of Six Sanctuaries)” was formed in the Nara and Heian periods, incorporating the Usa Jingu Shrine’s traditional worship of Hachiman (Shintoism) into the Buddhist teachings that were brought to Japan from the Asian continent. Ishimoto Yasuhiro visited the region to work on an assignment for the magazine THE SUN around 1976, where he experienced first-hand the Kunisaki area’s indigenous Buddhist art and culture mixing the ancient Japanese veneration for rocks and mountains, and the Magaibutsu (Stone Buddha) statues and carvings in naked natural rocks as part of the culture imported from the continent. Filled with a sense of vocation to deal with this as a matter that is directly connected to the Japanese people’s roots, Ishimoto began to take photographs in pursuit of his own questions as to where and what are the origins of the Japanese people.
Inspired by his photographs of the Den Shingon-in Ryokai Mandala (Mandala of the Two Realms, attributed to Priest Kukai) at Kyoto’s To-ji Temple at the time, Ishimoto sensed in the Buddhist statues and mandalas the “eros” that defines the human outlook on life. In the stone art of the Kunisaki Peninsula he sensed the splendor and forceful vitality of the aboriginal culture, and the simplicity and kindness of the people of Kunisaki he found manifested in flower and water offerings to Buddha figures that quietly stand hidden in little bushes, and in the expressionless Buddhist statues in groves at the feet of the mountains.
His continuous interest in Kunisaki prompted Ishimoto to choose the peninsula as a subject for his part in the photo book Nihon no bi: Gendai nihon shashin zenshu, which was published as Kunisaki-kiko from Shogakukan in 1978. Here he sounds a warning bell to the Japanese society, demanding to reevaluate the vigorous and humane qualities that the Japanese people used to possess, wheras the pictures shot in and around Usuki can be considered to be illustrating Ishimoto’s own answer to the problem. On display at this exhibition are original prints made by Ishimoto himself, around a centerpiece of works featured in the photo book.